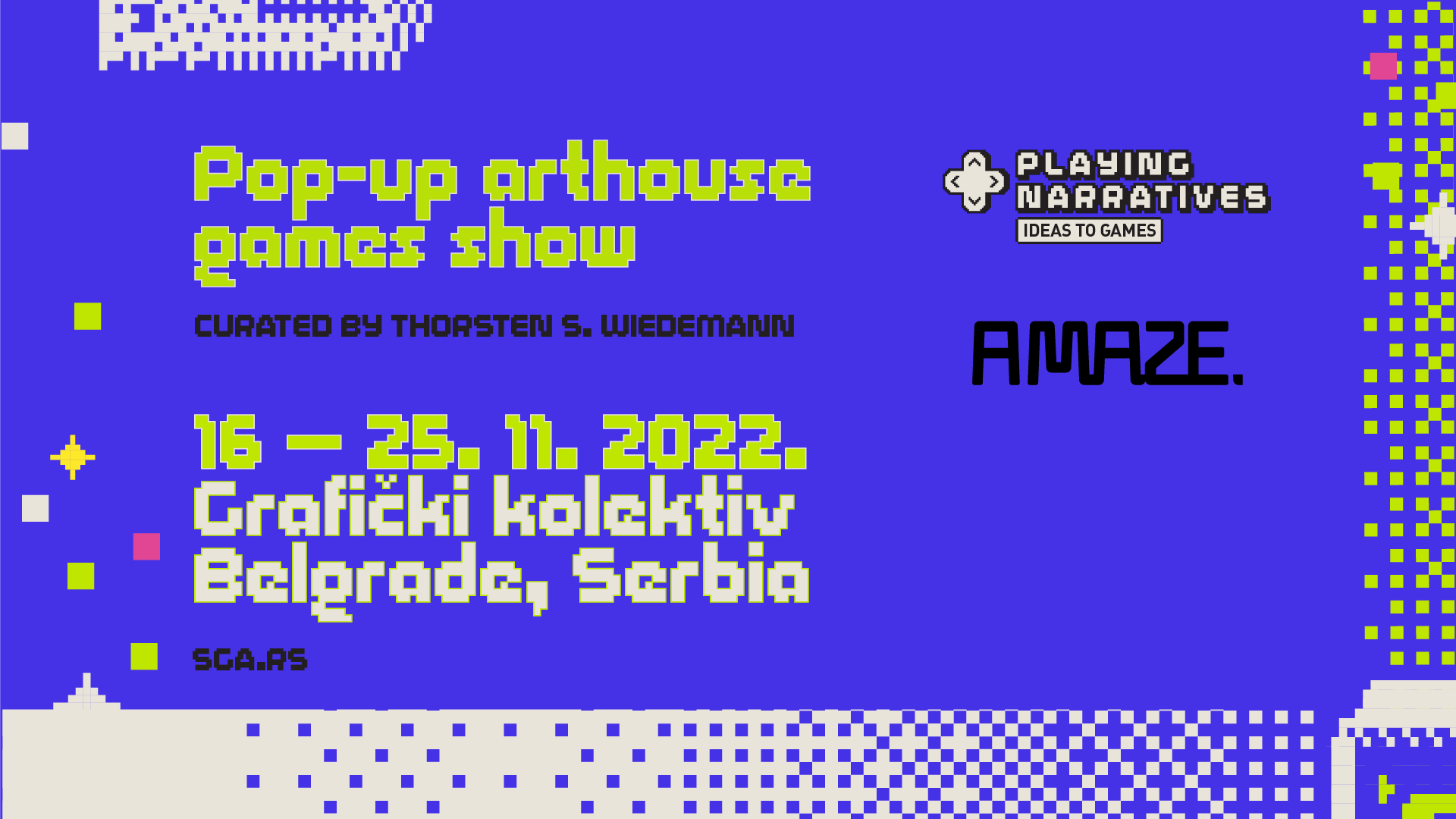 As part of this year’s Playing Narratives program, jointly organized by the Goethe-Institut, the French Institute in Serbia and SGA, a unique exhibition of the Berlin-based  A MAZE. festival will be presented from November 16th to 25th, with a dozen of interactive games by authors from all over the world, which players can usually try out in gallery spaces or at festivals - the so-called “arthouse games”

As a festival that is internationally recognized and relevant in its field, as one of the events that entered its second decade of existence, A MAZE. is often present at other global festivals, realizes projects in South Africa and other interesting parts of the world, and connects all those authors for whom the commercial success of games is not a priority as opposed to their creative and experimental aspect.

As an official partner of this year’s Playing Narratives program, A MAZE. arrives in Belgrade with a special pop-up exhibition Playing Narratives x A MAZE. A unique opportunity for young game creators and the widest audience to get to know a new dimension of video games, which is not aimed at commercial success but at exploring the limits of creativity and the medium itself. Among the artists who will exhibit their interactive works in Belgrade are Goblin Rage, Fantasia Malware, Fury/Geography of Robots, Albert Birney & Gabriel Koenig, Baptiste Portefaix, Faezeh Khomeyrani, Robin Baumgarten, Flat Head Studio and Flan Falacci, and Tatiana Vilela Dos Santos who are coming from France, Germany, Austria, USA, Holland, Sweden, Canada and Egypt.

In addition to the exhibition itself, which will be set up on two floors of the Grafički kolektiv gallery in Belgrade (Dragoslava Jovanovića 11), and will be opened on Thursday, November 16 at 7 PM, several accompanying events will be presented, with guest appearances by the authors and the curator.

Thorsten S. Wiedemann, artistic Director of A MAZE. and the curator of the exhibition will participate in a panel within the Pandora conference, one of the parallel events of this year’s Data Science Conference, as will Robin Baumgarten, one of the artists from the exhibition. In addition, Robin will present a workshop on creating alternative game controllers for high school students, while the Nordeus Foundation will also be involved in the implementation of this workshop.

As in previous years, the program is supported by the Franco-German Cultural Fund, which was established in 2003 on the occasion of the 40th anniversary of the Elysée Agreement. The general sponsor is Unreal Engine (that is, the companies Epic Games and 3Lateral), while the prominent sponsor is the company Ubisoft Belgrade. This year, the company Webelinx Games from Niš also joined the implementation as a sponsor, while additional support in the implementation will be provided by the French and Goethe institutes from the entire region. The exhibition itself was supported by the Creative Tech Serbia supercluster, with the support of USAID Serbia and ICT Hub Belgrade (through the Serbia Innovates project).

STAY AMAZED WITH OUR NEWSLETTER.

FIND A MAZE. ALSO ON