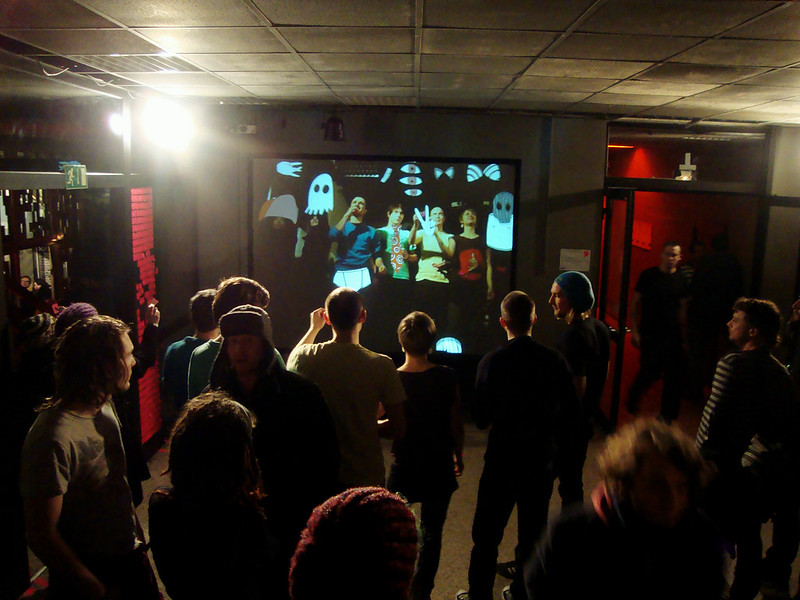 A MAZE. Interact …celebrating the Convergence of Games, Art, and Music is a festival in its own right that takes place within CTM.10. A Maze Interact considers the increasingly merging worlds of computer games, art and music from multiple perspectives; it highlights the both the courage in experimentation and the joy in playing; it actively reflects the relevance of technology and play in contemporary digital culture.

With its 5+2 modules consisting of the Interact Symposium (1), Workshops (2), Installations (3), the A MAZE. Jump’n Run Bonus Cheat club night (4), and the Music-Games Exhibition (5) the program content blurs genre and media borders. Artists display their work as installations, performances and club-acts and share their experiences within symposiums and workshops alike. Moreover, as computer games are an increasingly dominant part of the ‘creative industries’, the overlap between game development and music production is examined to reflect the ongoing structural transformations of the cultural economy. Accordingly, the two extra, bonus-level events, Games Culture Circle (+1) and Global Game Jam (+2), introduce a more applied approach.

As the contributions of game artist Julian Oliver, game scholar Michael Harenberg and game musician Leonard Paul, show: the computer game constitutes not only a popular point of reference for musicians and artists, but also becomes working material, an alternative channel for distribution or even a creative production environment. The same applies to the works of games producer Paulina Bozek, DJ Christian Candid and Martin Pichlmair, who just recently fulfilled his dream and founded his own music-game design start-up after writing his PhD in computer science, and experimenting with computer games as a media artist. Each with his or her own unique approach, they all contribute to the convergence of computer games, music, and art and contribute towards a better understanding of what this convergence might lead to. Keynote speaker of the Interact Symposium, Keiichi Yano, gives a first hand example. Starting as a jazz musician in Tokyo after studying music at the University of Southern California, he soon made his name as excellent coder for music games. He’s produced game hits like ‘Gitarroo Man’, ‘Ossu! Tatakae! Ouendan’, and ‘Lips’, but he never stopped playing music or lost sight of his roots in the arts.

Since January 2008, A MAZE. has analysed computer games from cultural, aesthetic, and social points of view. The critical appropriation and continued development of computer games as an artistic medium plays a central role. A MAZE. regularly produces exhibitions, lectures, workshops and concerts and creates a platform to communicate, express ideas, learn from each other and playfully experiment together. Creatives and scientists are encouraged to break through the borders of conventional computer games and surpass established concepts of play to merge enjoyment with critical reflection.

STAY AMAZED WITH OUR NEWSLETTER.

FIND A MAZE. ALSO ON